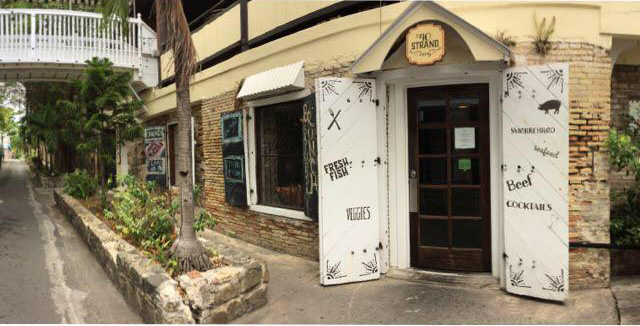 After sustaining minor water damage from Hurricane Maria, 40 Strand Eatery in downtown Christiansted is open for business and, according to co-owner Todd Manley, they are busier than ever! After Irma, they had visions of a grand season, then came Maria. They were worried at first, but are delighted by the support – and resilience – of the community.

40 Strand has been sharing daily menu specials on Facebook, including delicacies like lobster bisque, shrimp and grits, a fried chicken sandwich, and their famous 40 Strand Mac and Cheese Shoppe. They have air conditioning, WIFI, and are able to accept credit cards.

Toast Diner , The Mill Boardwalk Bar and Brick Oven Pizza, and Rum Wine Raw Bar, 40 Strand’s sister restaurants, are also open. The Seahorse Republic food truck also survived Maria and is working on a plan to re-open as soon as possible. Manley and his business partner, Brant Pell, are also planning to open another restaurant in a few weeks!

One repercussion of the storm is that several employees feared tough times ahead in the food service industry and left island. To that end, 40 Strand, Toast and The Mill are hiring professionals who want a career here on St. Croix. Specifically, Manley mentioned finding someone with pizza experience, though they are hiring for many positions.

Manley believes the most difficult thing for tourists wanting to visit St. Croix this winter is not enough hotel rooms. He shared that the Club Comanche Hotel is booked through March.

He definitely has a positive outlook for St. Croix. “Everything is what you make of it. If everyone picks up a tree limb every day, we’ll be back up in no time.” While many fear the worst, Manley expects the best. His gut tells him power will be restored for most of the island before the projected December goal. “They put a December date on it so that if they beat it, they look like heroes.” Like many, he shares the sentiment that St. Croix will come back stronger. “The best thing about some things being blown away is that we have a chance to rebuild it even better.”

While Manley and the 40 Strand crew agree that it’s difficult to give “one size fits all” advice about visiting St. Croix in the coming months, it sounds like good food is one thing that will not be lacking.